The Early Days of
Ribble Valley Cycling and Racing Club

Formed in 1951, and as one of Preston’s foremost Cycling Clubs, we the Ribble Valley Cycling Club, have a tradition of providing cycling opportunities for people of all ages for more than 70 years.

Most Preston Cycling Clubs then met in a large bare room in the town centre.  A group of young riders, from different clubs, were keen on the Continental style of road racing.  Their heroes were the winners of the Tours de France & Italy, classic road races; the Milan San Remo, Paris-Roubaix, the World Championships & the Tour of Lombardy.

No local clubs were interested in this type of racing.  These events were banned by the then nationally recognised cycling organisations.  Any cyclists who rode in, or promoted these events could be banned for life from riding for the recognised National bodies and could not represent Britain Internationally.

This group of Preston Cyclists were lead by Andy Anderton with Tom Potter, Peter Jones, William Ball, Brian Lathom and a few others.  They decided to join the rebel British League of Racing Cyclists in February 1951.  This was a new U.K. organisation, formed during the 1940s, to promote mass start road races.

Soon the Ribble Valley was going from strength to strength.  Led by the intrepid Andy Anderton they did extremely long, gruelling rides on Sundays.  These were usually to the beautiful Lake District and the Yorkshire Dales, often over the renowned high passes such as Kirkstone, Shap, Tan Hill, Fleet Moss and Kingsdale.  Some members lived in Blackpool and Westhoughton and cycled out to meet the club runs.

There was great rivalry between the older cycling clubs and the new road racing upstart clubs.  The traditional clubs rode in dark clothing on their club runs, on a single gear with mudguards and large saddle bags.  The racing members usually rode time trials, these were cloaked in secrecy and started at the crack of dawn.  These riders usually raced on single fixed wheels and in dark, unobtrusive clothing.

The Ribble Valley, and other BLRC riders, usually had three or four gears (max. in those days), and occasionally a double chain wheel.  Most rode without mudguards, especially in summer and no saddlebags.  The racing was mass start road events, held with much publicity, during the daytime and in bright team colours.  Wages were low and it took many young riders, years to save up for decent equipment.  Riders often cycled out to races, sometimes 20 miles or more, rode a long race, and then cycled home.

The BLRC started high profile stage races like the Tour of Britain and a number of professional teams were established.  Large crowds of several thousands watched the big sponsored races.

In the mid 1950s the Ribble Valley continued to grow.  Three timid young ladies came to enquire about joining the Club.  Janette, Barbara and June Walker. Some men objected to women members and so it went to a vote.  By just one vote women members were accepted.  Since that day women have been a vital part of the club.  Historically the Ribble Valley has the largest women’s membership compared to other clubs in the region.

During this time a large group of teenagers joined the Club.  This started the Clubs long success in winning the area’s school and junior categories in road racing, time trialling and cyclo-cross events.

The Club also began to develop a vigorous social & leisure side to their cycling. Peter Wards father let the Club use the Bowling Pavilion, behind his hotel in Lostock Hall, as a club room.  The Club organised cycling holidays, barbeques, and sports days against local cycling clubs.  A formal Club Dinner and Prize presentation was, and still is, held annually.

In the 1960s and 70s the Club continued to develop.  It promoted a wide range of excellent top class cycling events catering for a wide range of ages and abilities. Including weekly evening road races, time trials and a six stage Easter Four Day race.  The Clubs riders dominated events in the North West; some rode with distinction in the Tours of Britain and represented England Internationally.  The social events also multiplied.

The Valleys most prestigious event was the Classic Leyland Grand Prix.  Run over 90 miles, on a ten mile circuit round the town. It attracted the very best British professional and amateur riders, and included a team from Holland.  One year the race was awarded British National Road Championship status and the event was sponsored by Lion Brewery with crowds of over seven thousand watching the race and celebrities such as Miss Great Britain, the Blue Bell Girls and Coronation Street stars presenting the prizes.  There were also valuable spectator prizes, including best race photo. 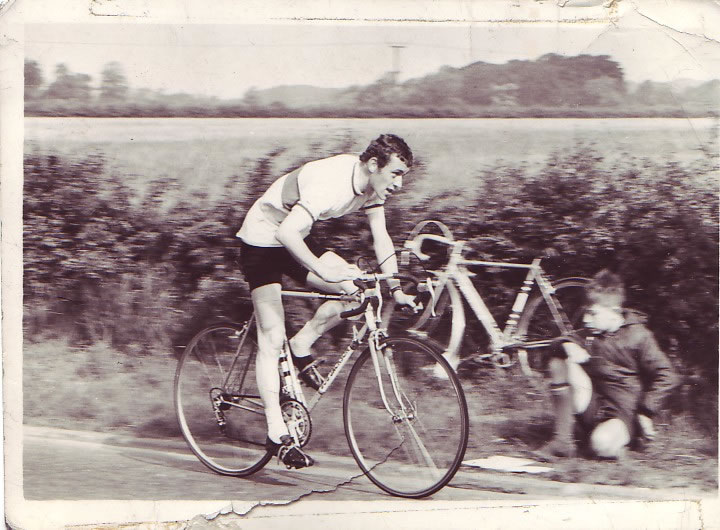 The Ribble Valley has continued to develop up to the present day and is still one of the most successful clubs in the North West.  We have an excellent Clubroom in Bamber Bridge for our Monday Club nights and the club organises a broad range of racing and social activities catering for a wide span of member interests and abilities, including new starters to cycling.

The Ribble Valley Cycling and Racing Club’s success has always depended on a large number of members who have put a lot of effort back into our great sport. The Club is fortunate in having a significant number of families and individuals who have given years of unstinting service.  These stalwarts are ably supported by more recent, keen members who bring fresh ideas and vigour to the Club organisation.