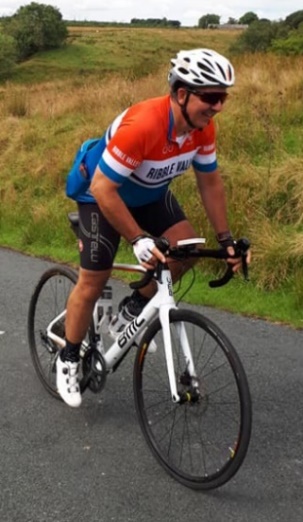 Originally from North Manchester, Karl has been a keen cyclist from an early age following in his Dad’s pedal strokes who rode and raced for Middleton CC. His Dad's love of cycling rubbed off onto Karl, who was gifted his first road bike in his early teens along with his brother. Cycling has always been part of Karl’s life, alongside many other team sports, but in his late teens he joined what was then known as the Territorial Army (TA), which somewhat reduced the amount of cycling Karl did during his 18 years military service, but he participate in some occasional racing with the Army Cycling Union (ACU). For several years Karl also participated in Mountain Biking mainly with friends, although he has become more involved in road riding again since his early 40’s. After moving to Preston, Karl mainly rode solo until he approached Ribble Valley CRC after seeing rides promoted through British Cycling's “Lets Ride” programme, and joined the Wednesday Night “Ice Cream” rides in 2018. As he enjoyed them so much, he then joined the club and started to participate in the Sunday Club Rides, progressing from C Rides to B Rides. Since joining Ribble Valley Karl has now taken ownership of managing and leading the Wednesday Night Social Ride, the Zwift rides during the winter periods, as well as becoming a ride leader on Sunday club rides. 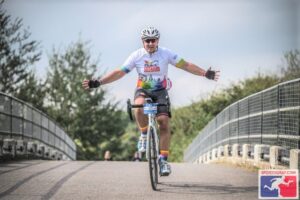 Karl also has a passion for riding for charities in memory of his Mum. These are normally Charity Sportives, where Karl does at least one annual long distance sportive for either Cancer Research or Breast Cancer Now. He has raised thousands of pounds for charity, participating in events such as the Prudential 100 and the London Revolution. His ambition is to attempt the Ride Across Britain event in 2023 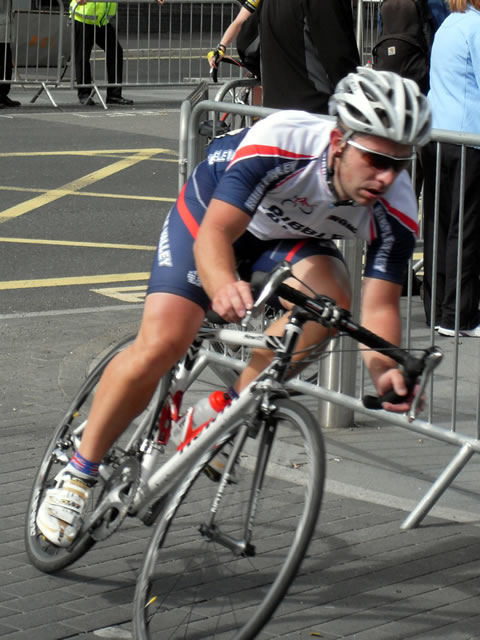 "I've been cycling since the age of 8yrs, and joined the Ribble Valley CRC at the age of 12 along with my brother Shaun. After a couple of years riding with the club, I started time trialling, 10miles & 25miles. Then from the age of 15/16yrs I started road racing. In 2002 I attained my Elite licence and won the Scienceinsport.com criterium series on Preston Arena, Tom Benson Way, Cottam. Due to work commitments I ended up having 5yrs off the bike. I started cycling again March 2007, due to a pending cycling trip to the Alps in France with around 20 club members. It was my dad’s 60th birthday that year along with fellow club member Jim Cardwell, it was the inspiration I needed to get cycling again. 2010 was my first full season of racing and I attained a second category licence.  The first season, since 2002. Next season Ribble Valley wants to put a racing team together." Contact: roy.pearson@me.com for more information. 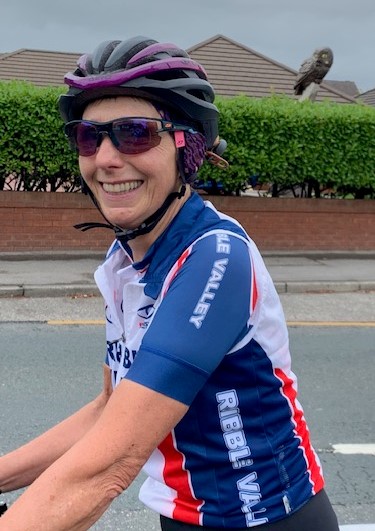 Pam joined the club in 2012, previously only cycling to get from A to B. After a few months of cycling progressively longer distances and a change of bike, she joined the club rides. She has been an active member ever since, leading Sunday C rides and enjoying the general camaraderie of club cycling. She loves being outdoors and enjoying the local countryside or seaside that is so accessible on a bike. 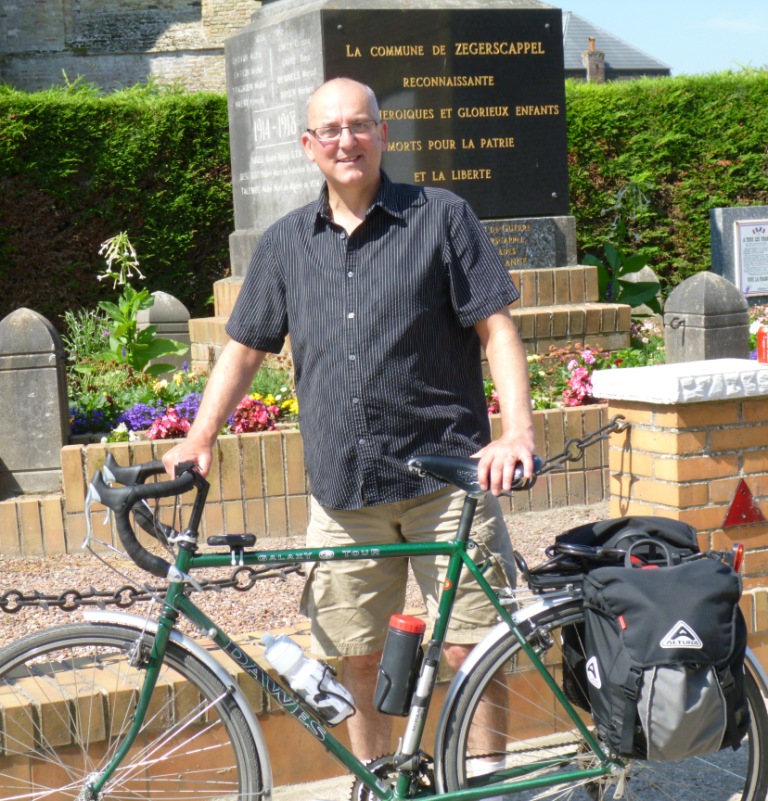 Membership Secretary with responsibility for Safeguarding

"I have always owned a bike, but as my knees aged cycling replaced jogging as my main from of exercise. I organise the rota of ride leaders for the C-Group rides and usually lead a ride each month. In the summer I join the Wednesday evening group for the ice-cream run to Bonds. I enjoy the C-Group rides for several reasons: I like the Lancashire countryside, the company and friendship of fellow cyclists and the exercise provide by a 40 to 50-mile ride. I recently purchased a mountain bike and now go on the monthly Trailer rides. Over the last 15 years I have been on numerous cycling holidays in Europe. We started in the Alsace and have subsequently cycled over the Alps, along the Canal du Midi, along the Mosel and Rhine, through Belgium and in the Loire, Burgundy and Dordogne."
. 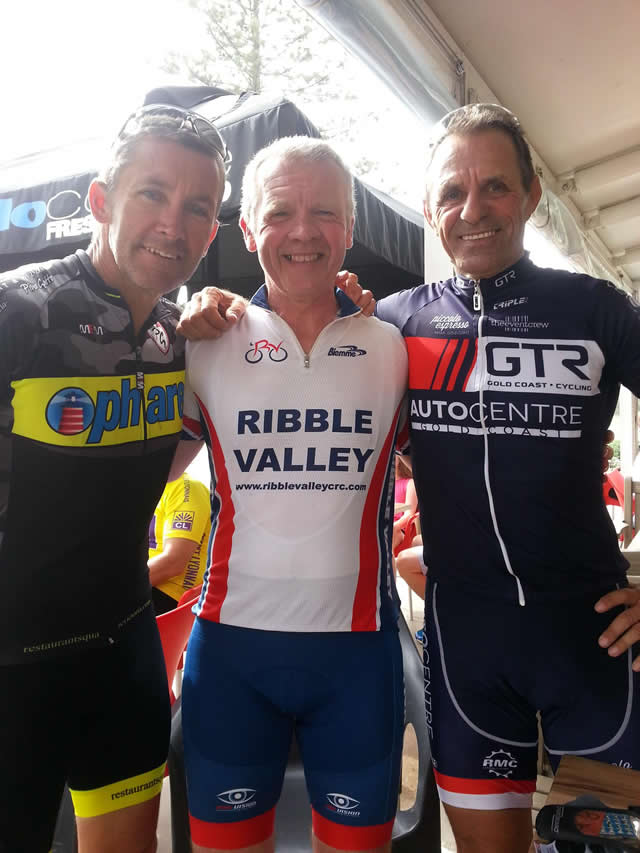 Ian is currently our Communications Coordinator, which means he helps to ensure information about the club is shared with the rest of the committee and the club's general membership. Ian also helps run the PETTS events (Preston Evening Time Trial Series), which take place every Tuesday from April through to September, and he represents our club's interests amongst the five other local organising clubs.  If you have any questions about riding those events or, equally as important, volunteering to marshal at one of the events he's the man to speak to about it.

"I first joined Ribble Valley cycling club in 1967 as a schoolboy and started racing at fifteen, competing in all disciplines, Time Trialling, Road Racing, Cyclo-Cross and Criteriums. then organising many races for a good few years. I left the club for a couple of years in the early eighties when our son Matthew was born, but soon got back into cycling when Matthew started to ride regularly. On becoming a Vet I joined the LVCRC, and raced in the Manchester Track league for two years. Great Thrills. In 2009 I had a serious accident that changed my life, but they still haven't got rid of me and I am now serving on the Committee again as the Communications Co-ordinator and am the Chief Marshall for all Ribble Valley CRC. events. Look forward to seeing you all at our clubroom or at our events." Yours in Sport, Ian Hodges. 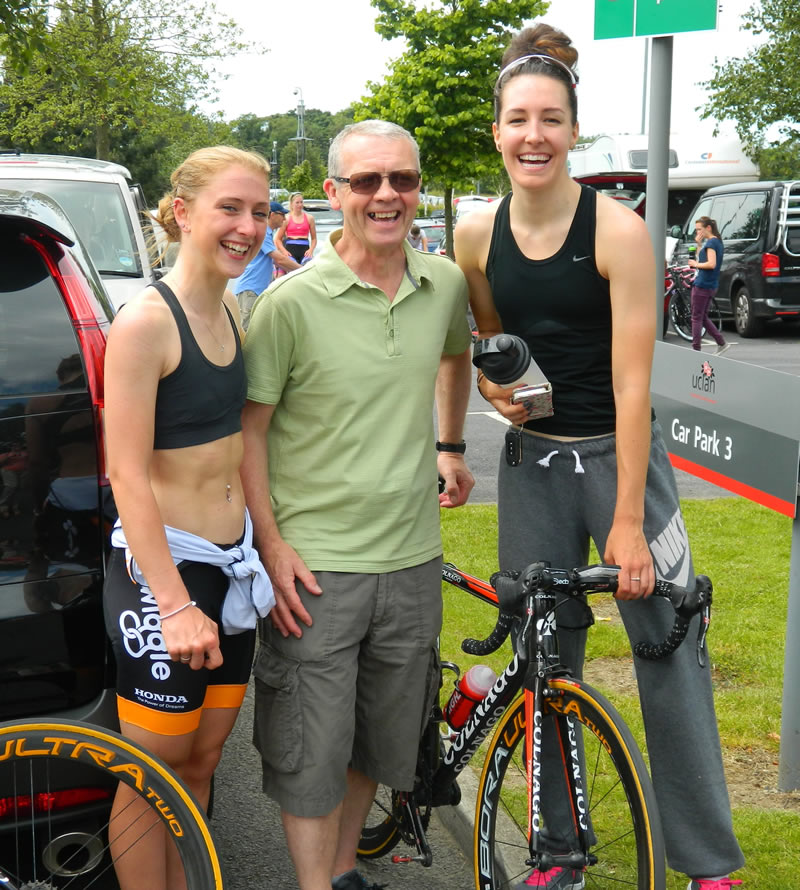 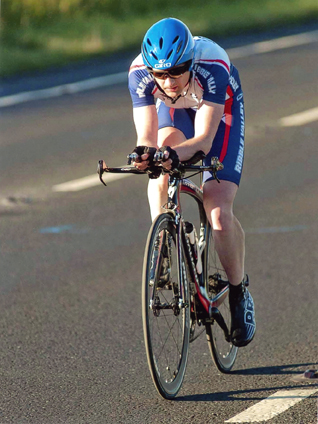 Simon is your Time Trial coordinator. He began racing in 1986, 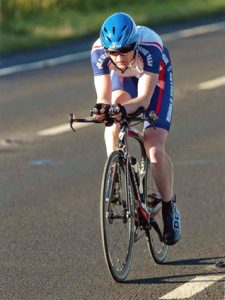 aged 16, and has raced all fixed distances, 10m, 25m, 50m, 100m, marathon 12 hour event and lung-busting hill climbs! He helps to promote the Preston Evening Time Trials Series (PETTS) at Brock on the A6 on Tuesday nights – a great place for the novice to experience time trialling for the first time. He can help the novice time trialist with advice on how to enter events, courses, safety etc. He also attends regular CTT committee meetings on behalf of the club. "Time trialling is an ideal introduction to competitive cycling, it’s just you, your bike, and the stopwatch – the ‘Race of Truth” You can contact Simon on 07816 834 111. 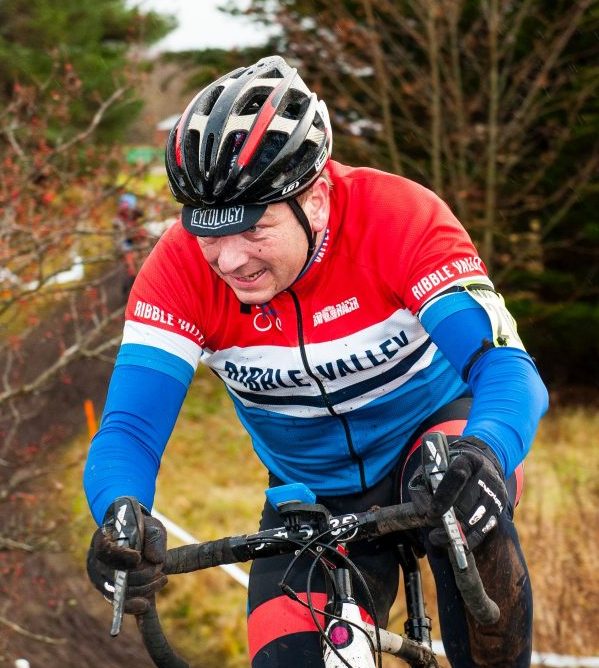 "My rebirth in cycling started around 10 years ago.  I had an old mountain bike in the shed, which never got used.  I finally started riding to work, and set myself a reward of a new bike, if I kept it up. I met my target and got a newer MTB.  The following year my wife got a road bike to get fit.  I got to borrow a road bike from a friend, and was introduced to speed on a bike!! It was a revelation, and I got a Cyclocross bike on the cycle to Work Scheme.  I got the CX as I commute on the Leeds/Liverpool towpath a lot, and needed a bike which could handle mixed terrain. After picking up the mileage, my wife and I joined RVCRC (around 6 years ago now), mainly for the social side, and to get out on longer rides, which I wasn’t sure I could do.  This was another revelation.  I met a great bunch of people, and graduated from the C rides to the B rides. My mileage picked up and I undertook my first 100mile ride, with the club. Over the last 6 years I have also taken up Cyclocross racing, and am a member of the Northwest Cyclocross Association. I also ride a lot of the newer SportCross type events (now often called Gravel events).  These are a cross between MTB and road Sportives.  They are half on road and half off, and suit me down to the ground. After 6 years with the club, I have been racing for 6 seasons, done quite a few 100mile rides, lost 3 stone in weight, been cycle touring and a number of other activities. I strongly believe in the club, and joined the committee this year to try and make it better for all of us." 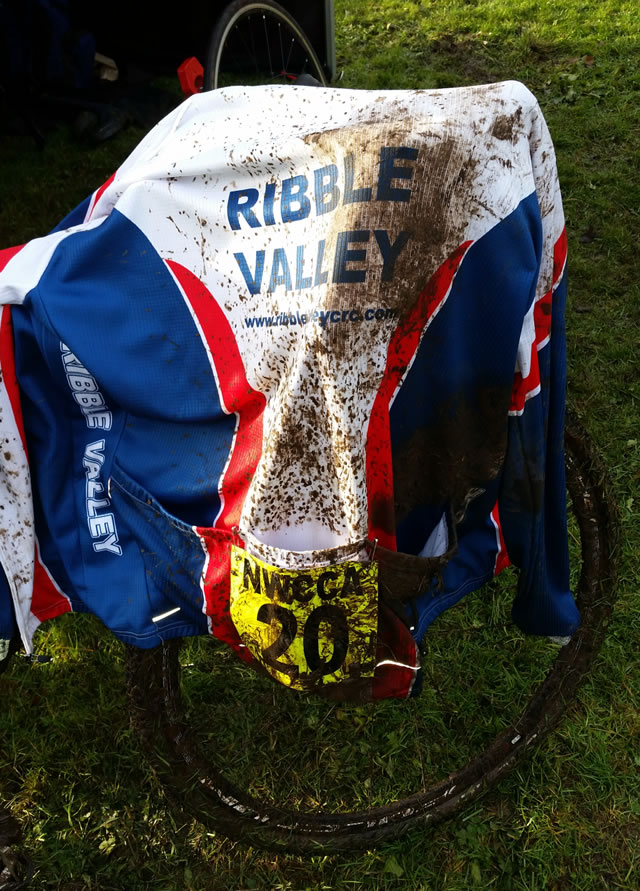 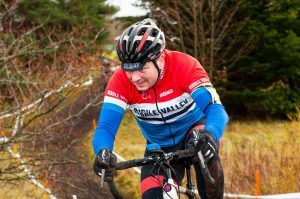 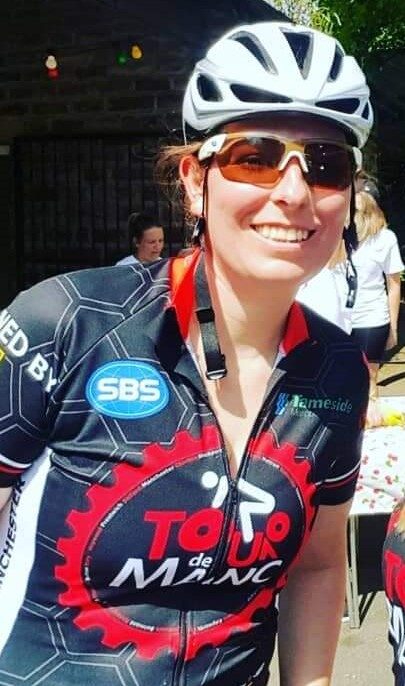 "My love for cycling began when I was given the opportunity to become a Breeze Champion during my time working in Sports Development. I spent the evenings leading rides for women who wanted to get back into cycling. My confidence increased and I started to use my bike to commute to work and the routes got longer as I got fitter, and in turn I started challenging myself to take part in Sportives and challenges such as Coast to Coast which I completed in 2018. I joined Ribble Valley after being contacted by one of the members who invited me along to a Sunday ‘C’ Ride and, as they say, the rest is history." 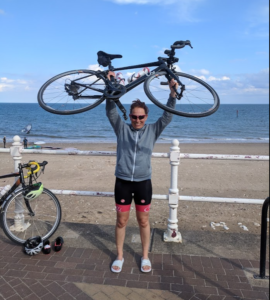 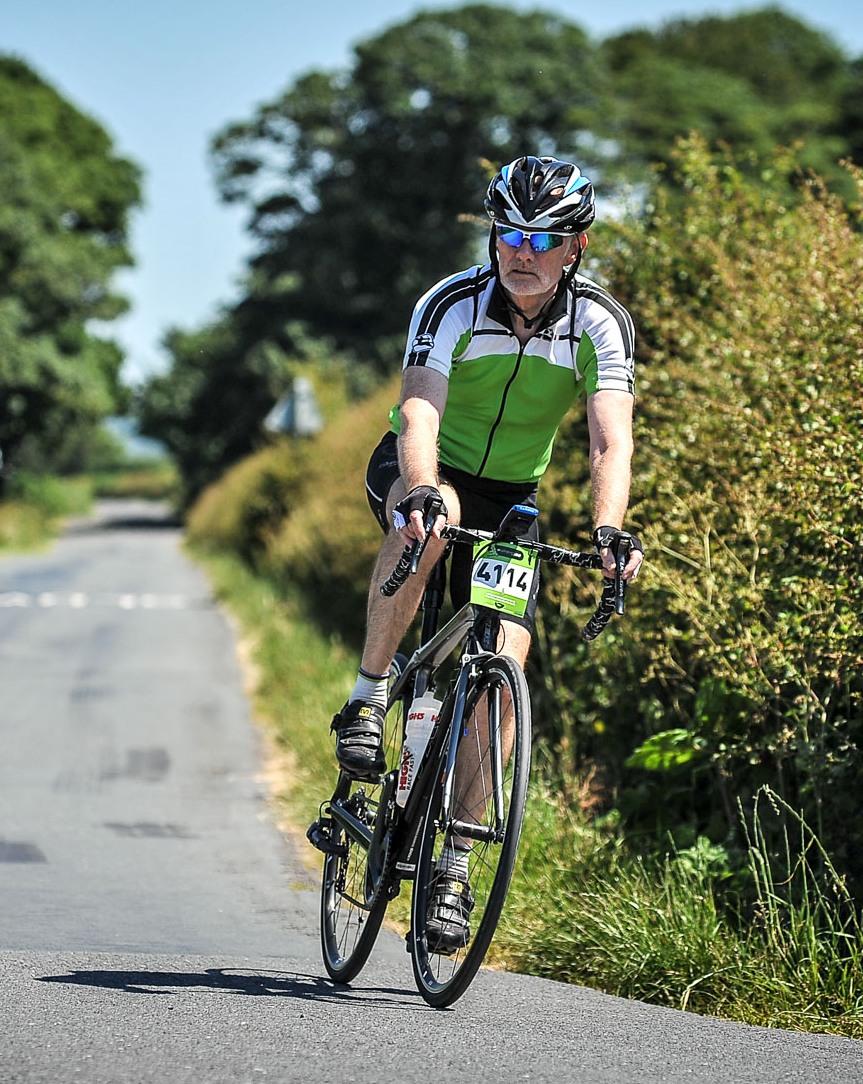 Gordon's involvement in the club has increased steadily over recent years and now regularly turns out on a Sunday morning to lead C-Group rides. Gordon's main interest is social riding where the objective is to enjoy the company of like-minded riders both on the road and at the cafe stops. Unil his retirement in 2019 he commuted to work daily on his fixie (about 20 miles) in all but the worst of weather, a machine that he also uses on club rides - if it's not too hilly! At the same time Gordon likes to challenge himself and each year trains (!) for some long distance sportives  - usually century rides. A very capable bike mechanic, Gordon likes to tackle almost all his own (and other's) bike maintenance. He is the club's current Welfare Officer, a Rider Leader for HSBC Guided Rides (Let's Ride) and a member of Cycling UK. He owns 4 bikes (at the moment). 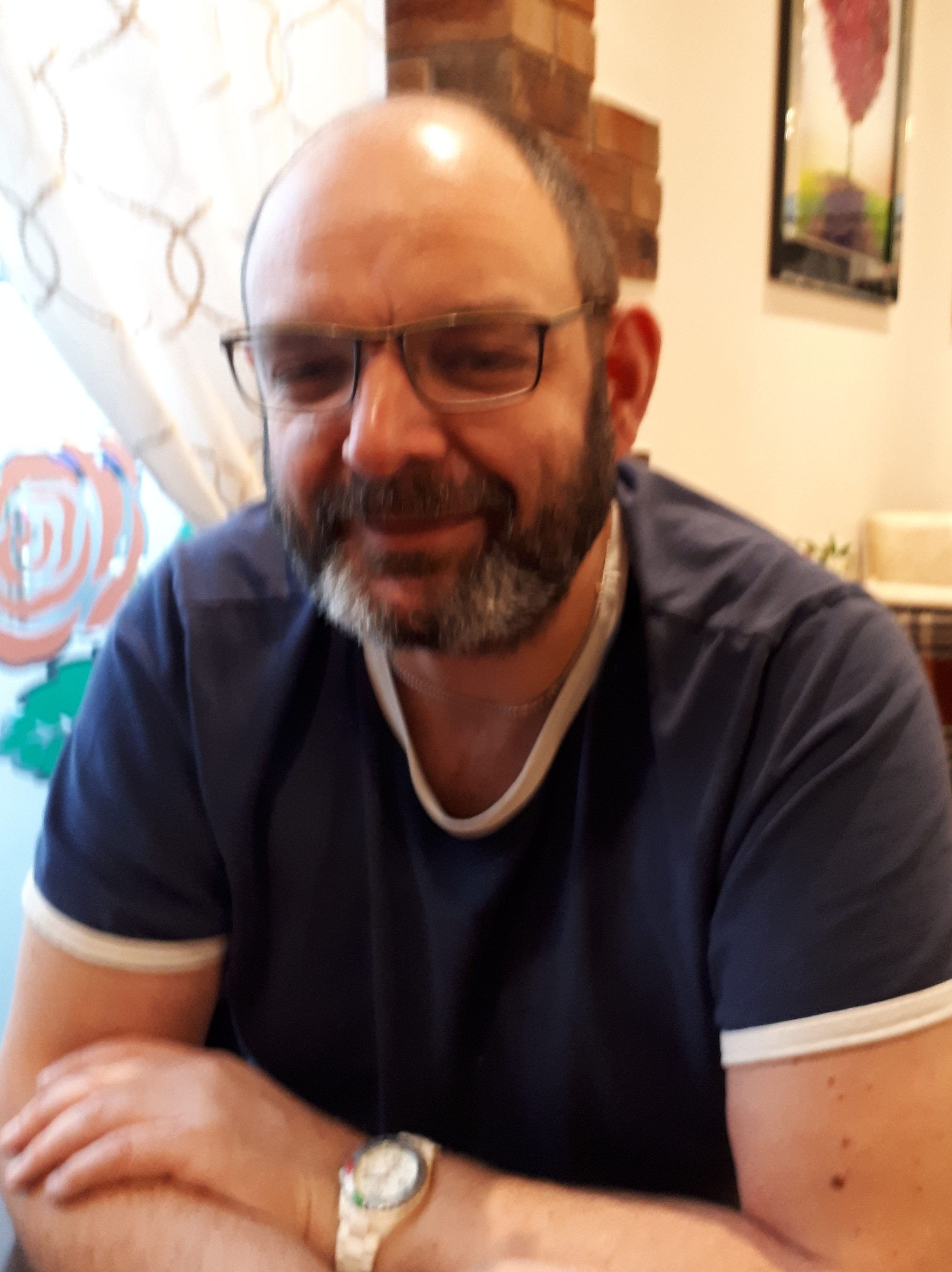 My love of cycling began when I started watching it on TV. Ten years ago I got my first bike and I haven't looked back. Since joining Ribble Valley I have achieved more than I could ever have imagined: the greatest being 160 miles in one day!